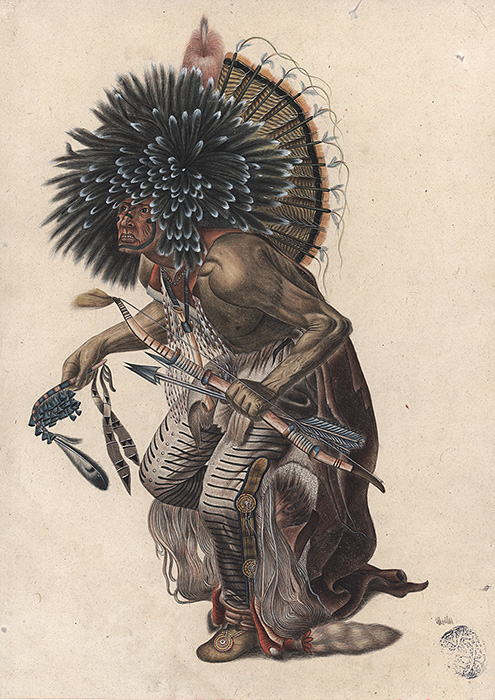 Watercolour painting after Karl Bodmer - Pehriska- Ruhpa. Minnetaree Warrior in the Costume of the Dog Danse.

Portrait of the chief Pehriska-Ruhpa (“Two Ravens”). Warrior of the Minnetaree Tribe (also called Hidatsa or Gros Ventres of the Missouri). He was an eminent Minnetaree and close friend of Maté-Topé and he paid many visits to Fort Clark during winter 1834.

Bodmer painted him first in his ceremonial robe holding an enormous medicine pipe (see Tableau 17). In this portrayal Pehriska-Ruhpa is dressed in the regalia of the Hidatsa Dog Society (see Tableau 23).

Our watercolour was made after Tableau 23 from Prince Maximilian's “Travels in the Interior of North America, 1832-1834”, published 1837-44 (see No BT2389), a picture considered by many art historicans to be the finest Indian portrait ever made.

This watercolour was painted by an artist at court of the Maharaja of Tonk, Northern-India, in the second half of the 19th century.

Watercolour painting, with opaque white, and pen-and-ink drawing, on paper, by a court painter after Karl Bodmer. With the seal of the Maharaja of Tonk, Northern-India 2nd half of the 19th century. Tonk was a princely state of India.