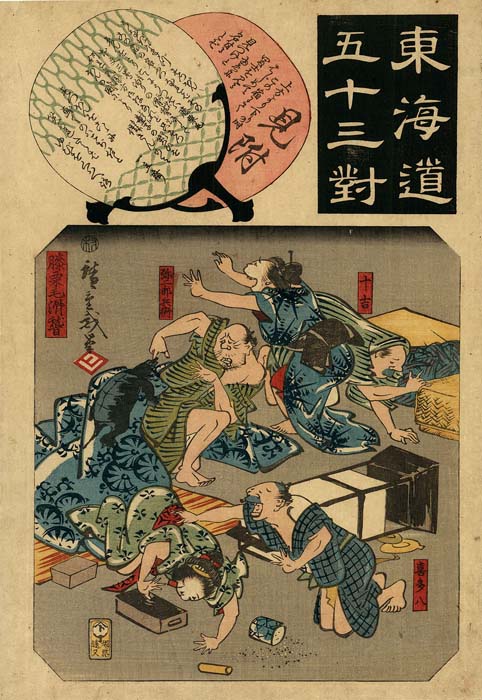 Hiroshige: Turtle bite
Move your mouse over image or click to enlarge

Yajirobei, one of the two heroes of the famous comic picaresque novel Tôkaidôchû Hizakurige by Jippensha Ikku (1735-1831), is bitten in the finger by a turtle, resulting in a tumultuous scene in their inn.

Series: Tôkaidô gojûsan tsui (53 pairings for the stations of the Tokaido highway)

Excellent impression and colours. Full margins, unbacked. A few tiny spots, partly due to printing, at left a weak diagonal crease, in left margin a very small tear. Overall very good condition.
This Tokaido series of altogether 58 sheets, in which the stations of the Tokaido road are paired with various legendary, historical, dramatic or literary episodes, was jointly designed by three of the most important ukiyo-e artists of the time - Kunisada, Hiroshige and Kuniyoshi, - with 21 prints being by Hiroshige.
The signature "gihitsu" was typically used by Hiroshige for his humorous works. Ill. in Marks, Kunisada's Tôkaidô. Riddles Japanese Woodblock Prints. Leiden 2013, p. 105, no. T78-29A. Cf. also British Museum 2008,3037.04331, MFA Boston 21.6558; The Walters Art Museum 95.571.