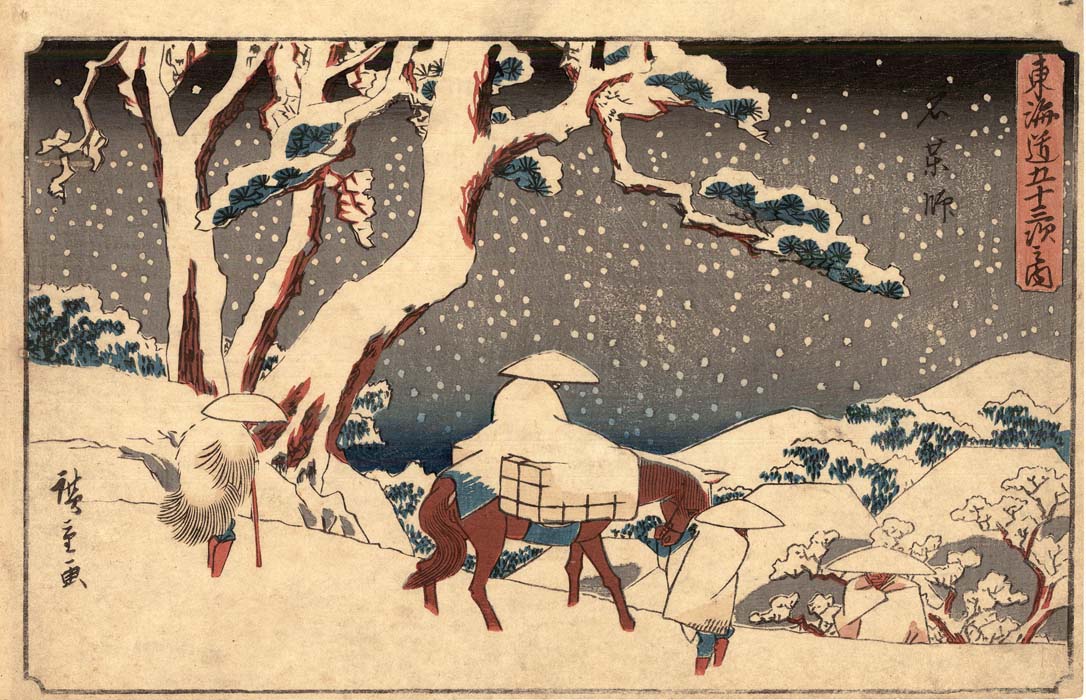 Hiroshige: Ishiyakushi
Move your mouse over image or click to enlarge

A group of travellers on horseback and foot at nightfall on a hill at heavy snowfall; below them in the valley the roofs of the village are visible.

Title: Ishiyakushi (Ishiyakushi, here the 45th station of the Tokaido)

Very good impression and colours, only minimally faded. Unbacked, margins a little bit trimmed at bottom and right side. Mainly in margins partly a little bit rubbed and soiled, in the image resp. at margins two small wormholes professionally restored, at upper right corner two small ink marks. Overall very good condition.
This is the very atmospheric variant with a dark sky and dark blue bokashi at the horizon, which really conveys the bone-chilling cold of a snowy night. This sought-after winter scene is probably the best known and most memorable print from the series of the “Gyôsho-Tôkaidô” (so called after the semi-cursive Gyôsho script in the series cartouches).
Ill. Tamba Tsuneo, The Art of Hiroshige, Tokyo 1965, p. 141, no. 325 and commentary p. 25. Ukiyo-e Taikei, vol. 14, p. 79, no. 100. Izzard, Hiroshige, 1983, fig. 46, p. 59. This print variant cf. MFA Boston 11.40024, 21.9359; Metropolitan Museum JP573; Art Institute of Chicago 1928.353; BnF Gallica https://gallica.bnf.fr/ark:/12148/btv1b10526879p.